It is the morning after my first 5K run.  My calves are so sore that I can barely walk.  Yesterday was the first time that I had ever run that far!  It was soooooo worth it though!

I ran the Alzheimer's Association 5K.  My grandma, Oda, passed away in March from Alzheimer's.  It is a terrible illness that is incredibly difficult to watch.  I ran in her memory, and raised almost $300 in donations. 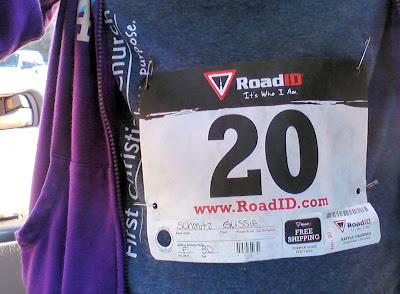 I felt very "out of place" while waiting for the race to start.  Everyone around me looked like seasoned runners.  I knew that I would finish close to last and was hoping I could finish in less than an hour.  The town of Washington is very hilly, so that didn't help much!  It started out mostly level with a few gentle slopes here and there.  I'm not sure how far I made it before my foot falls turned  to steps.  I did have to walk more than I thought I would.  The hills kill me!  In general I walked the up hills and ran the down hills and flats stretches.

At about two miles I started to think that I wouldn't finish.  I knew that there were a few people still behind me, so I pressed on.  I was running for Grandma, and not about to give up!  At the last water tent, about 1/10 mile from the finish, I grabbed a cup and sipped.  Bad idea!  I was so close to the end, I should have waited.  I'll spare you the graphic content and just say ... It's a good thing there was a sewer grate nearby!  One of the few people behind be passed me at the point, but I finished just seconds behind her.

At the finish line, my FIRST FINISH LINE, the crowd was cheering, clapping and holding up signs.  It felt so strange, in a good way, to have people cheering for me.  I finished in 37 minutes and 35 seconds!  I was hoping for under and hour and actually trying for 45 minutes.  I'd say I made my goal!! 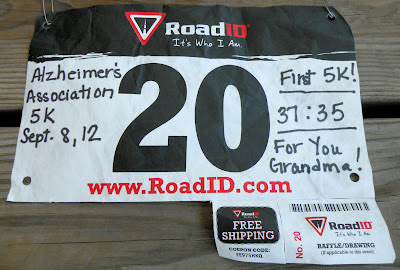 Now, I want to ask you to check out the Alzheimer's Association website.  There is a lot of information there and a lot of resources.  I think that you will be surprised to learned how many people are affected by this disease.  September is world Alzheimer's month and they have suggestions for some ways to get the word out.  If you feel led to give a donation to the Alzheimer's Association, you can put in the tribute box "In Memory of Oda Snyder".  I hope that I made her proud yesterday! 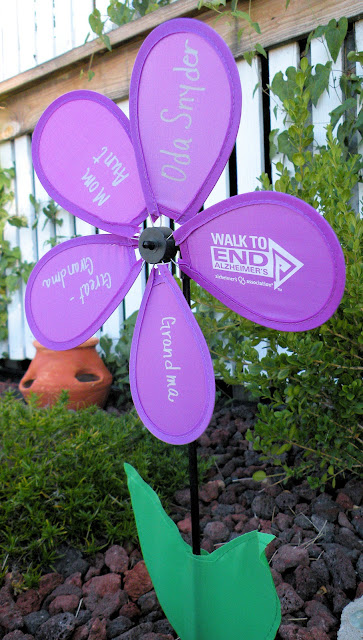